AMERICAN IDOL IS A SHAM! 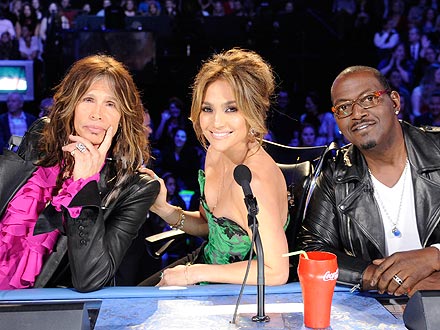 From left: Steven Tyler, Jennifer Lopez and Randy Jackson
Ryan Seacrest suggested at the outset that Thursday's hour would be "a very  shocking results night."

Well, a viewer might have thought: Of course he's  not going to stand there and tell an audience of millions to sit back and  relax.

But he was right. (Read on to find out why.)

The loser was Pia Toscano, the beautiful power-balladeer  who would have seemed destined for at least the top four. And she was joined  in the bottom two with another strong performer, Jacob Lusk.

(Stefano  Langone landed with them in the bottom three – no surprise at all, probably  not even to him.)

Pia took it all in with a lot of calm dignity, although you wouldn't have  blamed her for collapsing the way Casey Abrams did not long ago. The judges,  though, were clearly miserable with the outcome – indignant, actually.

"I have no idea what just happened here," said Jennifer Lopez, who had started to  cry.

"You¹re one of the best singers," said Randy Jackson. "This makes me mad."

"A mistake is one thing," said Steven Tyler in one of his strange bursts of  eloquence, "but a lack of passion is unforgiveable."

He meant the voting  audience, not Pia.   Ryan, sharing the sentiment that something had gone wrong here and probably  also realizing that this made for smashing television, asked her to sing an  encore.

She made it through "Stand by Me," then broke into loud sobs as  Jacob embraced her.

So, one is left to ask, what was that about? For the first time this week,  she'd made a change from her usual repertoire when she sang Tina Turner's  "River Deep, Mountain High."

I often found Pia a little stately, like a  cruise liner forging ahead through choppy seas, but this time she had much  more drive – the judges were pleased, and she seemed pleased too.

Yet viewers  jilted her while keeping on the nice but not very dynamic Paul McDonald.   Randy and Ryan both said the result might have been inadvertent, due to  at-home viewers being complacent about Pia's rank and neglecting to vote for  her.

I would also ask whether the judges share in the blame. By being so  lavish in their praise for all the contestants, they aren't nudging voters  or shaping the contestants into camps of hot versus not.   Because, after all, Jacob didn't deserve to be down there in the bottom two,  either. (Jennifer looked especially stern when that was announced.)

Again,  what did the poor guy do wrong? Technically, nothing. "Man in the Mirror" was  one of his strongest, least mannered performances. Should he have been more  mannered?

Before singing, he'd made an odd, sour comment suggesting that people who  didn't vote for him should be the ones examining their reflections. Maybe  that struck a note of hubris or defiance with voters.

Also during the hour: The legendary Iggy Pop sang "Real Wild Child." His leaps and hops seemed forced, and perhaps he should wear a shirt or a  tank top, but an aging punk rocker probably doesn¹t worry too much about his  dignity. He was terrific.
Posted by Hart Kirch at 9:23 PM No comments:

Conversation topic for the morning: Archaeologists in Czech Republic think they may have discovered evidence the world’s first “gay caveman,” dating back to 2900-2500 BC.

“We know that people from this period took funeral rites very seriously so it is highly unlikely that this positioning was a mistake," said the lead archaeologist. "Far more likely is that he was a man with a different sexual orientation, homosexual or transsexual.”

Is that really the most logical conclusion?

Read it at Telegraph
Posted by Hart Kirch at 10:48 AM No comments: